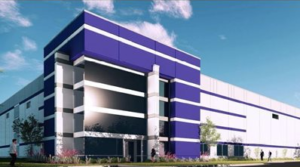 The space is part of a new 150,838-square-foot, Class A distribution center being developed by Cratos Industrial Properties. The tenant is scheduled to occupy the space in Q1 2020. The building includes modern features designed for e-commerce and other distribution businesses, including 32-foot clear height ceilings. Kate Coxworth of Morken & Associates represented the developer in the transaction.

“Winslyn Industries has seen tremendous growth in a short period of time, nearly tripling in size since its inception in 2016,” said Pietrarosso. “After an extensive search, we secured this high-quality, modern distribution space due to its ability to support the tenant’s growing e-commerce needs.”

Winslyn Industries, founded in 2016, is a wholesale distributor of Winflo range hoods, sinks and bathroom vanities, along with other customized kitchen and bathroom products. The company distributes products through large home improvement stores, kitchen and bathroom wholesalers, fabricators and home builders, along with selling directly to the consumer. The company also offers products including granite, fireclay and stainless steel kitchen sinks, as well as bathroom vanities and countertops.

“There appears to be no slowing in sight for Chicago’s industrial market, particularly among small- to mid-sized space occupiers who need to expand their footprints to meet demand,” said Dan Brown, president of Brown Commercial Group, who worked with Pietrarosso on the transaction. Both brokers were involved in representing Winslyn Industries as part of its previous expansion into the Batavia facility. “Moving into 2020, we expect to see tenants continuing to grow and look for modern, efficient space in the suburban market.”

The Fox Valley submarket remains a strong industrial market, recording a 4.73 percent vacancy rate in Q3 2019, according to research from Colliers International. This is 43 basis points below the 5.16 percent recorded one year ago and among the lowest in the Chicago market. In the third quarter, the submarket saw positive net absorption, totaling 738,951 square feet, for the eighth consecutive quarter.

The Fox Valley submarket is transforming as it attracts significant speculative development, including the 1850 Fabyan Parkway project and several others. Active construction projects in the submarket range from a 303,601-square-foot development at 2525 Enterprise Circle in West Chicago, Illinois to two smaller developments by Cratos Industrial Properties at 1475 and 1425 Nagel Boulevard in Batavia,. Those building are 36,100 square feet and 28,500 square feet, respectively.